Rivwest Finance in the Community

One of our directors, Johno O’Sullivan was delighted to present the Junior Strings Scholarship and the Junior Woodwind Scholarship to Mikaela Sutcliffe and Lily Burn respectively. Congratulations Mikaela and Lily, and all the other 2017 award recipients.

In late October, our Managing Director Bob Elliott took part in the ‘Crewsy Memorial Golf Day’ which is held in honour of Detective Constable William Crews and to raise money for Police members and their families in times of hardship and need. It also raises money for scholarships into the Police Academy for underprivileged young adults. Sadly, Bob and his team were robbed of the best dressed prize by a team of Donald Trump impersonators. They have pledged to pull out all the stops for next years costume!

In excess of 100 people gathered in Dubbo on Friday 24th February to celebrate the Grand Opening of Rivwest Finance Limited’s new premises at 50 Talbragar St. The official opening also coincided with their anniversary of 21 years in business providing leasing, commercial hire purchases and business finance to its non-metropolitan customer base.

Federal Minister for Small Business and National Party Federal Member for Riverina, Hon. Michael McCormack was in attendance to officially open the building, along with Federal MP Mark Coulton; as well as leading members of the Dubbo business community all wishing to acknowledge Rivwest who have been stalwart finance operators in regional NSW since 1996. “Rivwest is a real regional small business success story – and today’s expansion is another injection of confidence in Dubbo and communities throughout western NSW,” Mr McCormack said.

Group Chairman and co-founder Robert Elliott stated in his welcoming address that he, “felt very proud of the journey Rivwest Finance has experienced to become the thriving business it is today” and is excited to see this continue into the future. His sentiments were echoed by his co-directors – Susan Crawford and Johnathon O’Sullivan of Dubbo, and Michael Graham and Daniel Donebus of Wagga Wagga.

2017 is shaping up to be a big year for Rivwest, whose newly renovated premises will accommodate the recent growth in personnel and resulting deal volume increases; and, their intention to further establish themselves as a holistic finance provider. Rivwest was recently admitted as a member of the Provincial Finance Group which will allow them access to the expertise and experience of an association who control capital of well over $1,000 million.

Rivwest Finance Limited was established in 1996 by its founders at a time when the large banks were closing down their regional branches. They identified that the market needed a trustworthy finance provider that offered a more personalised service, one that Rivwest is now known for. The business has since grown and services most parts of New South Wales and the Australian Capital Territory, well beyond its original inception in the Riverina and Central West. Although the principal business activity of Rivwest has been and remains that of a finance company, its range of services continue to be examined and now includes housing loans and the funding of insurance premiums. During its 21 years in business Rivwest have supplied $186 million in capital to small businesses, which statistically, has created around 2,000 full time jobs in country NSW. Rivwest currently operate with $200 million funds under management, have 70 shareholders and 450 investors.

The Directors of Rivwest are looking to the future. Mr Elliott shared in his address that “we crawled before we could walk, survived a somewhat rebellious adolescence and the acquisition of these historic premises is somewhat symbolic of our maturity and coming of age.”

Rivwest proudly operates within the motto ‘Keeping Capital in the Country.’ After 21 prosperous years, Rivwest are looking forward to servicing Regional NSW with renewed vigour. 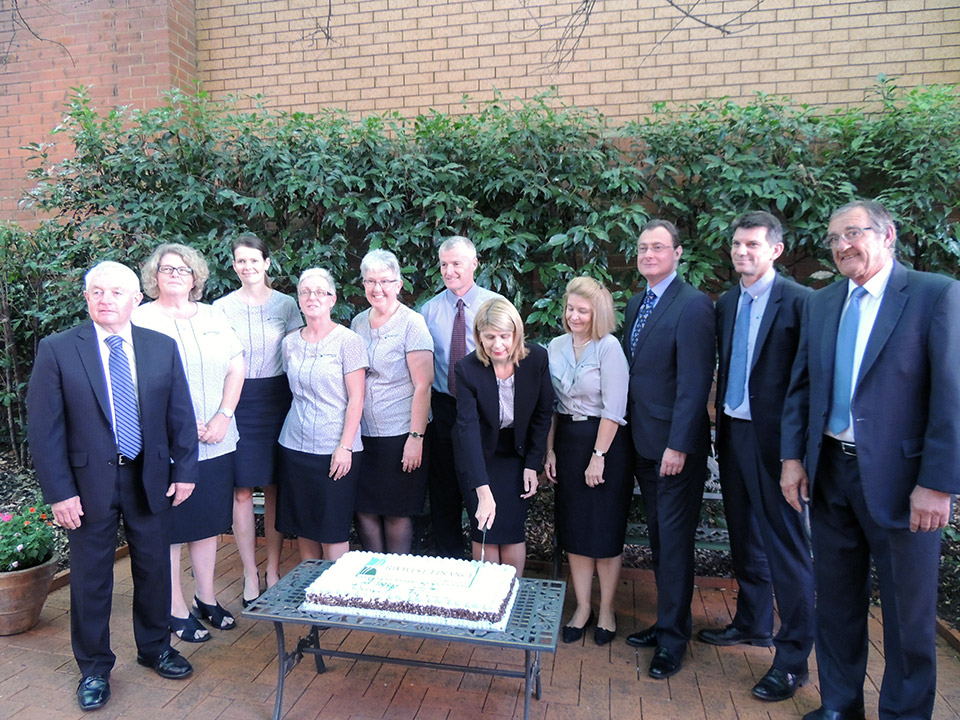 Mr O’Sullivan was hopeful that the contribution, made on behalf of Rivwest Finance may provide some relief to those who were suffering as a result of the devastating Sir Ivan fire, which tore through thousands of hectares of land near Dunedoo and Cassilis in early February.